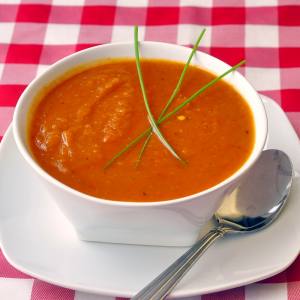 Roasted Squash and Red Pepper Soup
2 pounds squash, peeled and cut in 1 1/2 inch cubes
3 tbsp olive oil
3 large red peppers
1 quart vegetable stock ( use low sodium if nuying prepared stock)
5 cloves roasted garlic
4 tbsp finely grated fresh ginger
1 tsp black pepper
1 tsp curry powder
1 tsp chinese five spice powder
1 tsp ground dry thyme
sea salt to season to taste
Toss the cubed squash and whole garlic cloves in the skins with the olive oil and a sprinkle of sea salt. Place in a gleass baking pan and bake at 375 degrees F for about 45 minutes or until the pieces are fork tender and the edges have become slightly caramelized.
Roast the red peppers over an open gas flame or on the grill until the outside skins are blackened. Toss the roasted peppers into a ziploc bag and let stand for 10 minutes to steam off the skins. Remove the blackened skins as well as the seeds and chop the peppers into 1 inch pieces.
Add the cooked peppers and squash to a 3 to 4 quart saucepan along with the roasted garlic that has been removed from thier skins and all of the other ingredients. Simmer for 20  inutes before pureeing the soup with an immersion blender. Season with salt and pepper to taste before serving.
6 shares
Click here to cancel reply.

I used butternut here but I've used all kinds of squash before. Use your favorite!

What type of squash do you use for this recipe?