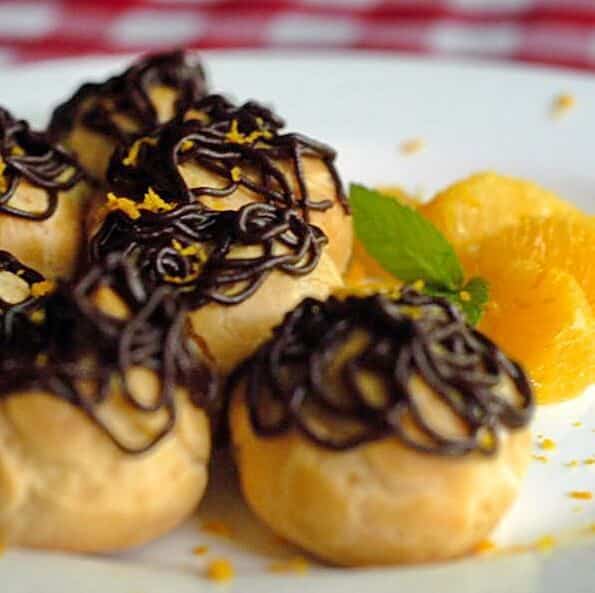 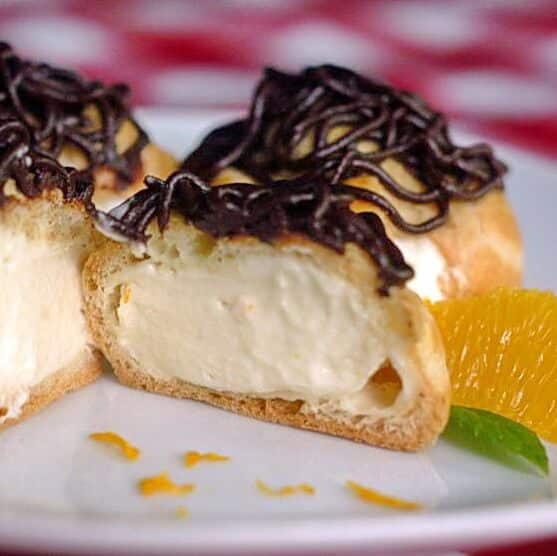 These were a huge hit at our little gathering of friends last night. Three dozen seem to have disappeared far too quickly.

Chocolate Orange Profiteroles
For the cream puff pastry combine add to a saucepan
1 cup water
½ cup butter
And bring to a boil. Reduce to medium flame and add, all at once
1 cup all purpose flour
¼ tsp salt
Cook this mixture stirring constantly for an additional 3 minutes. Allow this mixture to cool slightly for about 10 minutes before adding, one at a time
4 large or extra large eggs
Beat well after adding each egg until batter is smooth
Cover and chill thoroughly in the refrigerator.
Preheat oven to 400 degrees F.
Drop by rounded teaspoonfuls ( or pipe small mounds using a piping bag ) onto a lightly greased baking sheet.
Bake at 400 degrees F for 15 minutes, then reduce the heat to 375 degrees and bake for an additional 10 -15 minutes until the puffs are golden brown and do not collapse when removed from the oven. These should be uniformly golden all over with no pale sides. Cool completely.
For the Filling
Scald 1 ½ cups whole milk in the microwave or on the stovetop along with the zest of a large orange that has been very finely chopped. Microwave works best as there is no chance of burning the milk.
Meanwhile, in a saucepan combine
4 ½ tbsp flour
1/3 cup sugar and a pinch of salt
Over medium flame slowly add the scalded milk whisking constantly.
Continue to cook over medium heat until mixture begins to slightly thicken. At this point remove from heat and pour about a half cup of this mixture onto a slightly beaten extra large egg whisking constantly. Pour the egg mixture immediately back into the pot, continuing to constantly stir. Cook for an additional minute or two until pudding consistency and remove from the flame. Stir in :
2 tbsp butter
1 tsp vanilla extract
Cover and allow to completely cool in the refrigerator. When it has completely cooled, if a skin has formed on your custard, remove it before continuing.
Whip to firm peaks
1 ½ cups whipping cream
3 tbsp sugar
1 tsp vanilla extract
Gently fold custard into the whipped cream. Do not over mix. Fill the profiterole shells with this mixture using a piping bag or by splitting the shells in half and spooning the filling into both halves before sticking them back together.
For the chocolate glaze:
Heat to scalding in a heavy bottomed small saucepan
¼ cup whipping cream
1 tsp very finely chopped orange zest
Stir in
¾ cup semi sweet chocolate chips over very low heat.
Spread glaze over the tops of the profiteroles (or pipe onto tops in overlapping circular pattern using a number 4 tip.)
67 shares
Click here to cancel reply.