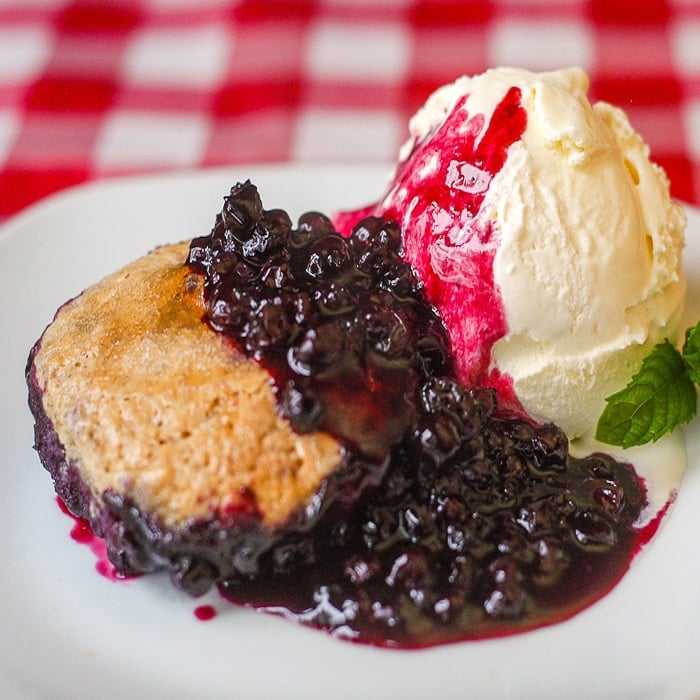 From time to time I get emails from curious readers from different parts of the globe, wondering just where in the world I am. The blog has seen readers from 127 different countries since it started almost a year ago, some of whom had never heard of Newfoundland.

I was reminded of that a few days ago when I went blueberry picking with the family on historic Signal Hill here in St. John’s, Newfoundland and thought I’d share with the good readers a small piece of our beautiful corner of the world. 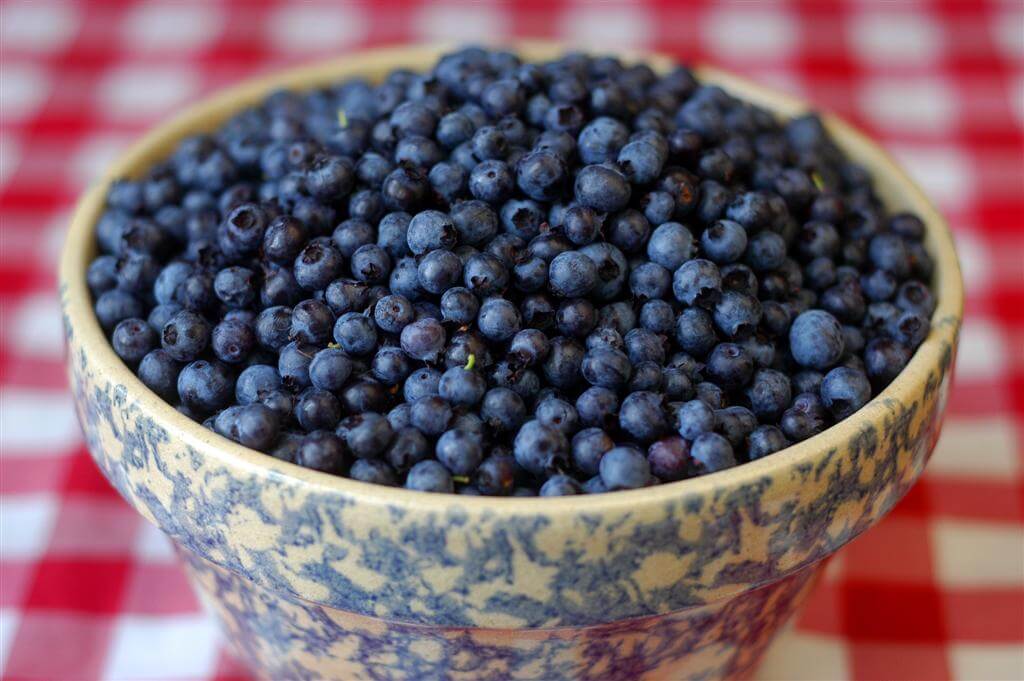 All about the view.

From high atop Signal Hill, what you see spreading all around you are beautiful vistas of the Atlantic Ocean, our city and a ruggedly beautiful coastline.

In the photo below is the view as you look east from Signal Hill. The point of land that can be seen at the right of this photo is Cape Spear, the most easterly point of land in North America. Head east from here and the next thing you hit is Ireland. 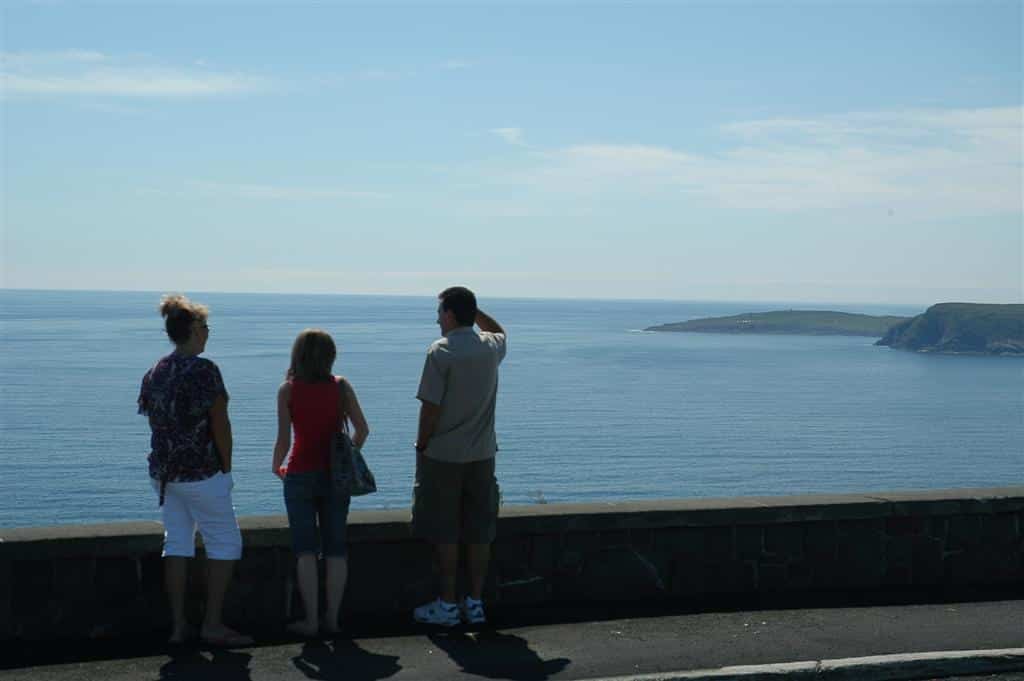 Looking toward Cape Spear, the most easterly point in North America.

Historic Cabot Tower sits at the highest point of Signal Hill and it is the first stop for the many thousands of visiting tourists to St. John’s each year. On any given day you may find as many locals as you would tourists, the views are so spectacular that even after decades of gazing, we never tire of them.

The tower was built in 1897 to commemorate the 400th Anniversary of John Cabot’s discovery of Newfoundland in 1497. 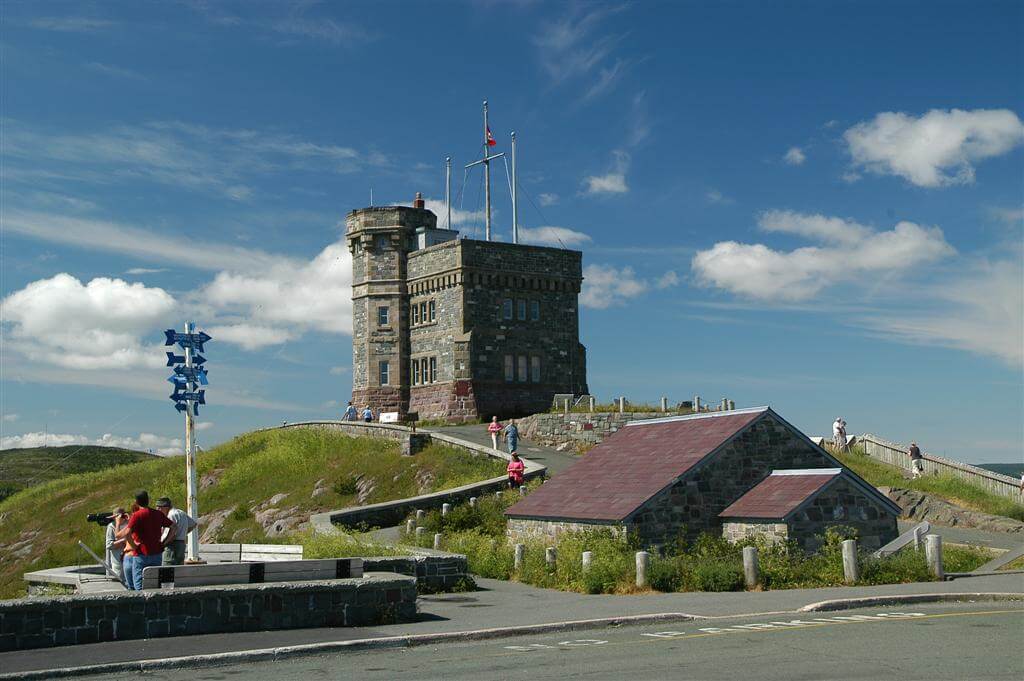 At the base of the hill lies Fort Amherst which sits at the Narrows, a mere slit of an opening to St. John’s Harbour, one of the most sheltered ports on the continent. 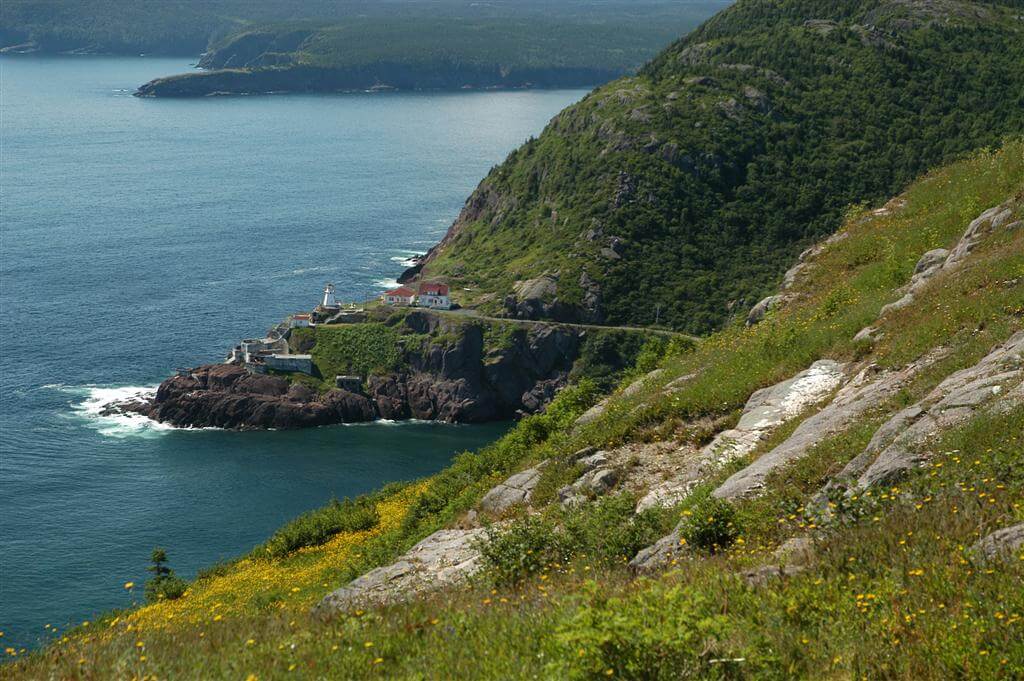 Fort Amherst at the mouth of St. John’s Harbour

Below is a view of downtown St. John’s, Newfoundland from historic Signal Hill.

A piece of communications history.

The hill is very significant in the history of communications as well, being the point of land that Marconi received the first transatlantic wireless signal from Cornwall, England on December 12, 1901. It was a single letter “S” sent in Morse Code.

How far we’ve come since then. 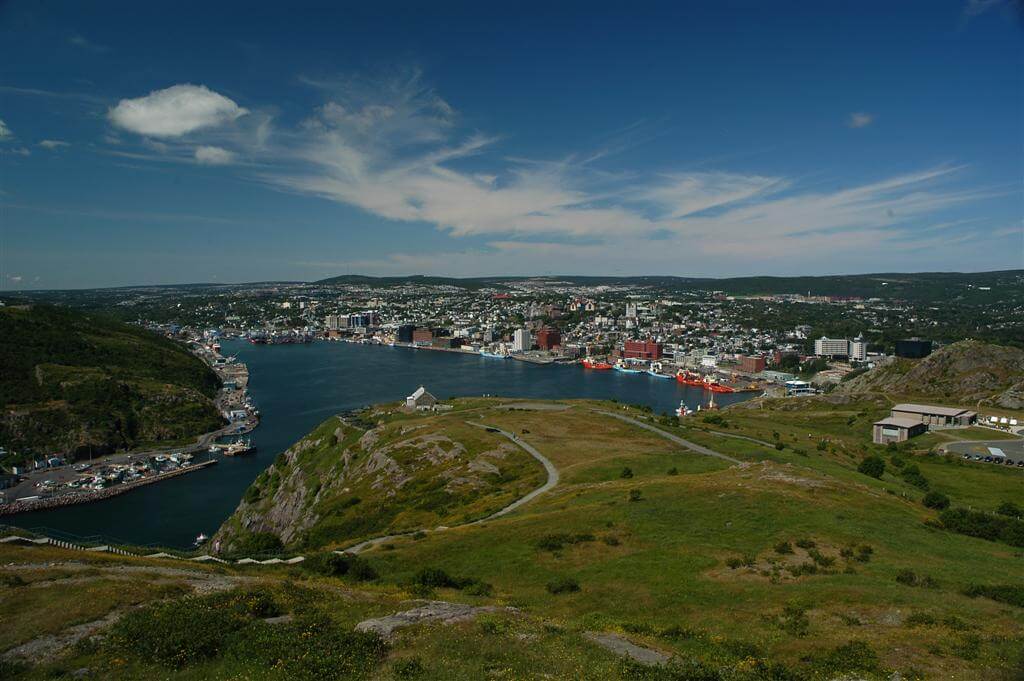 Below is a panoramic view of downtown St. John’s including it’s famous sheltered harbour and sheltering Southside Hills. Cabot Tower sits at the top of Signal Hill on the horizon just to the left of centre in this photo.

Panorama of St. John’s from the Rooms

Wild blueberries are an iconic image in Newfoundland’s natural environment and indeed, it’s history. The grow wild on Signal Hill as they do all over the island. 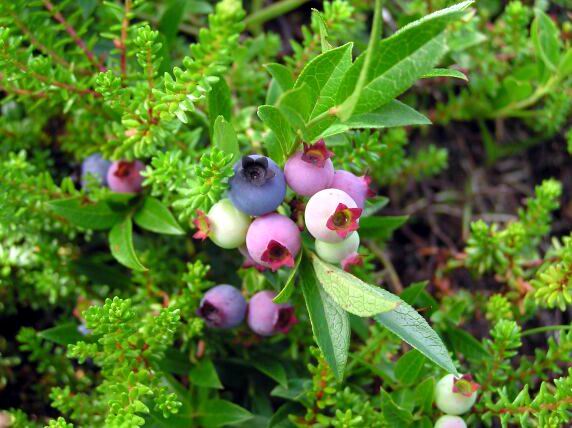 Many, if not most Newfoundlanders recollections of late summer and early fall are peppered with memories of family outings to go blueberry picking.

Gallons of blueberry jam were made and bottled for winters to come and served as both memories of summers past and promises of those yet to come. Many folks still take to the barrens and rocky hills at this time of year in search of these sweet blue pearls to fill their freezers for those slightly more tolerable but still endless, Newfoundland winters. 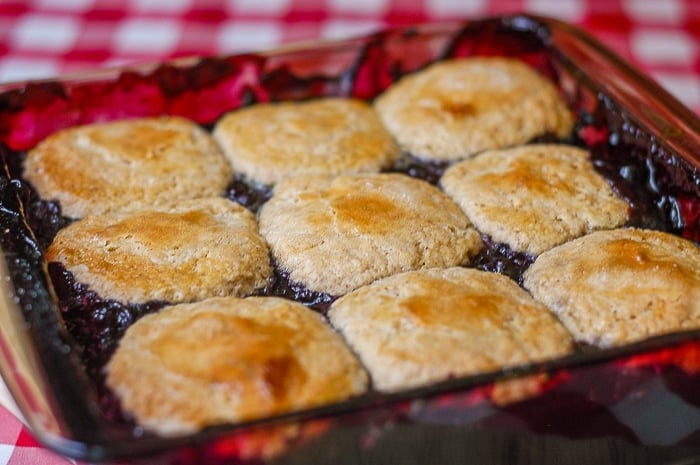 …and finally, the fruits of our labours on this occasion, found their way into this delicious Cinnamon Biscuit Blueberry Cobbler. The vanilla Ice Cream is in no way optional!! 😉 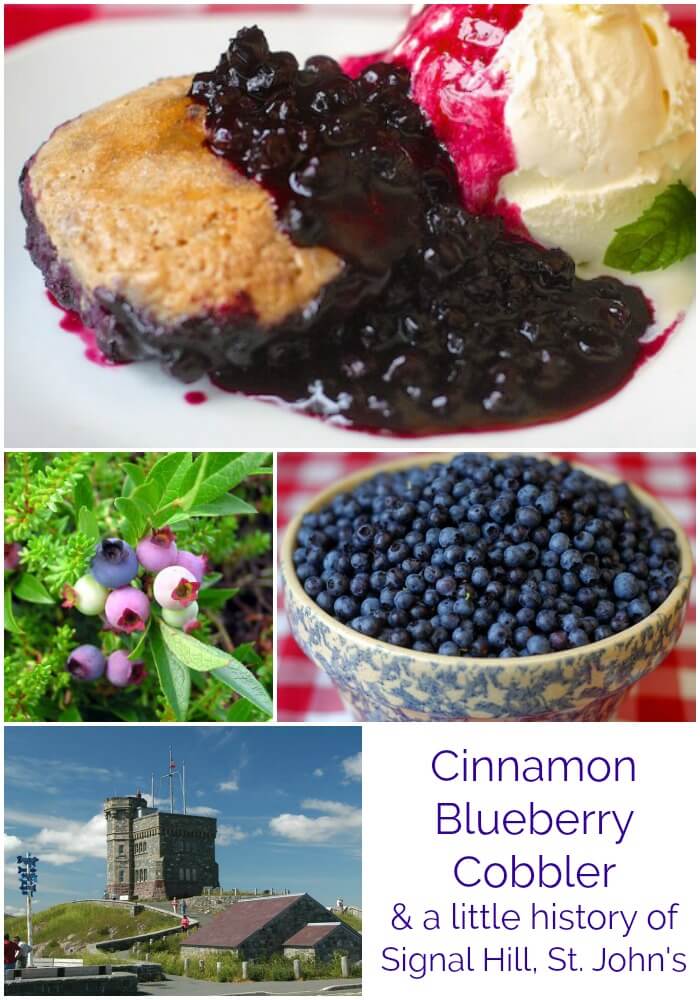 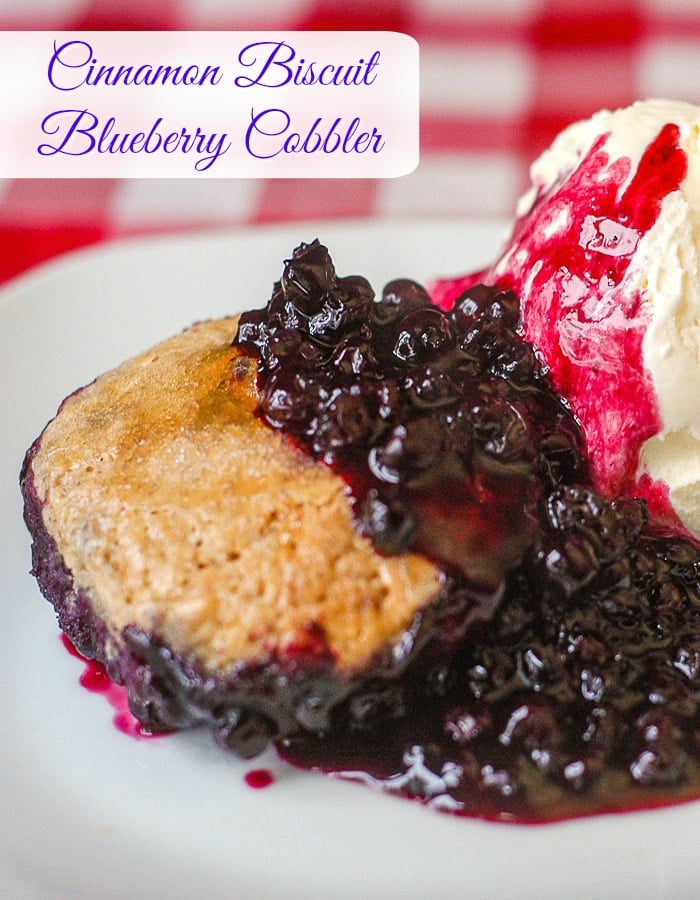 Rock Recipes a participant in the Amazon Services LLC Associates Program, an affiliate advertising program designed to provide a means for us to earn fees by linking to Amazon.com and affiliated sites. Our product recommendations are almost exclusively for those we currently use or have used in the past.
Visit my Amazon Store for my favourite kitchen gadgets and appliances, plus recommendations from my personal cookbook collection.
Continue to Content
Prep Time: 20 minutes
Cook Time: 40 minutes
Total Time: 1 hour

For the blueberry bottom layer

For the cinnamon cobbler biscuits

For the cinnamon cobbler biscuits

I substituted with black cherries and peaches as I already had them and needed using up. It turned out so good. The biscuit top is really what makes it.

I loved the photos and and history of Newfoundland with this post this morning. I love in BC. It gré up in Quebec and your talk of wild blueberry picking evoked sweet memories for me. All six of us kids were roped in to go no matter what, with Dad and Mom. Then my Dad would reward us with a day at the beach afterwards if we picked our bucketful each! Thank you for the photos. I’ve never seen Newfoundland. Love the history of it. I’m almost 70 now, but I would still love to go there one day. I collect your lovely recipes. Thank you so much for my daily emails. I post your recipes on my Yummly app And take my ta let to the kitchen to cook a BarryRock dinner

I so enjoyed your sharing your home community!

beautiful pics and can't wait to try the recipe! There's no place like home!