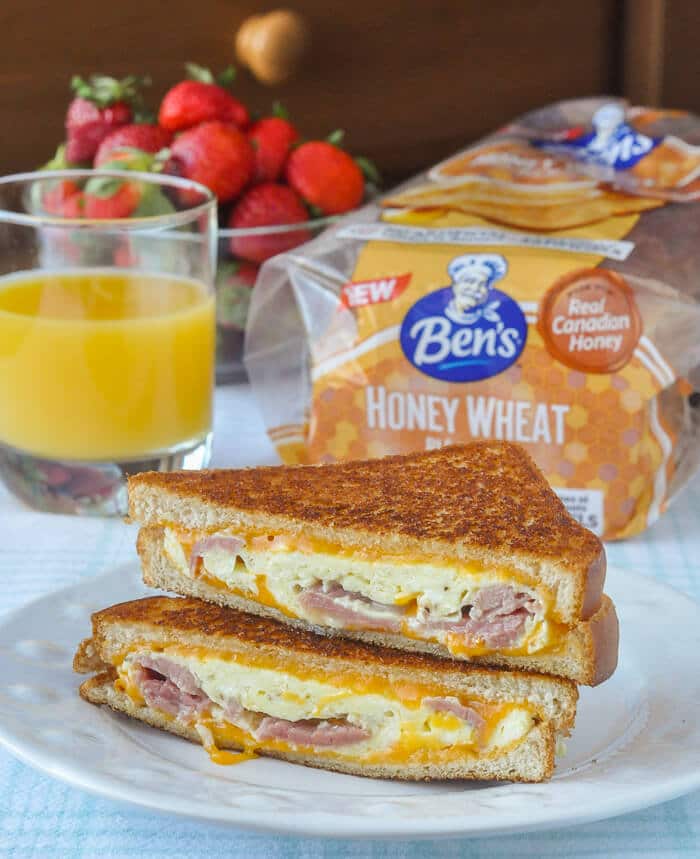 There’s no doubt that we are a sandwich family. From bacon and egg breakfast sandwiches to a quick grilled cheese lunch, and even a hearty, satisfying club sandwich for dinner, the versatile sandwich often comes to the rescue; especially on those busy days when work and after school commitments leave the whole family most pressed for time. So, when Ben’s asked us to try their new Honey Wheat Bread, we were quickly onboard.

This delicious bread is new to Canadian stores, has no artificial colours or flavours, and is only available for a limited time. It features the delicious taste of real Canadian honey baked right in… and you can really taste it too. One of the first things we tried with this bread was French toast with strawberries at a weekend brunch. It was as if this honey kissed bread was actually made for that purpose. It was totally delicious.

The trend toward natural sweeteners instead of refined sugars is on the rise in Canada, so it’s lucky that the production of honey is actually on the increase here too. 43,277 tonnes of honey were produced in 2015, an 11.4% increase over the previous year. Those bees aren’t called busy for no reason.

The sandwich idea I’ve posted today is inspired by my own kids who are big fans of anything under the “grilled Cheese” banner. This is a great sandwich idea for weekends, or mornings when you have a few extra minutes. Wrap them in aluminum foil and they even make a convenient meal-on-the-go for early morning practice. My perennially hungry son ate one on his way to guitar class after school just last week.

We had some baked ham left over from a dinner last week that I cut that thin slices and chopped it into smaller pieces. Mixing it straight into the scrambled egg omelet makes the sandwich easier to handle and less messy for the little ones too.

The Ben’s Honey Wheat Bread crisped up beautifully to a gorgeous golden brown in the pan, and the flavour of the honey really added a delicious counterpoint to slight saltiness of the ham in the omelet. Give them a try in your family. I’ll bet they’ll love them too.

Check back soon for other great lunch and dinner sandwich ideas that we’ll be featuring using Ben’s Honey Wheat Bread in the coming weeks.

For more information on the entire line of Ben’s Breads as well as their other baked goods, be sure to visit the Ben’s website.

Rock Recipes is very pleased to have Ben’s Honey Wheat Bread as sponsor of this recipe post. Both product and compensation were provided in exchange for this recipe post. The opinions expressed are based solely upon my experience and are entirely my own. 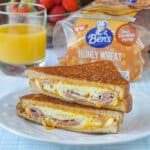