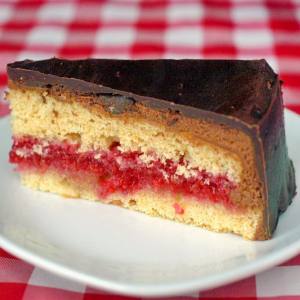 This tempting torte was thrown together for dessert a couple of nights ago based on some leftover chocolate buttercream frosting and raspberry compote that I already had on hand. A really delicious mix of flavours in this one for sure and it was well appreciated by my dinner guests and a couple of lucky friends who received the leftovers the following day.

As an alternative to brushing the cake with orange syrup you can use a couple of ounces of Grand Marnier or similar orange based liqueur or even a raspberry liqueur if you prefer.

Add
2 eggs, one at a time, beating well after each addition
1 tsp vanilla extract

Always begin and end with dry ingredients. Pour batter into a greased and floured 9 or 10 inch round cake pan. Bake for approximately 25 minutes at 325 degrees F or until a toothpick inserted in the center comes out clean. Watch them carefully as they can over bake quite quickly. Cool on a wire rack .

Boil together in a small saucepan until the mixture becomes syrupy about 10-15 minutes.

Bring the raspberries and sugar to a rolling boil. Add enough of the cornstarch slurry to slightly thicken the compote. Cook for an additional 30 seconds to a minute. Set aside to cool.

Combine and bring to a boil. Continue to boil over medium heat without stirring until the mixture reaches 240 degrees on a candy thermometer.

Meanwhile beat together to stiff peaks

Slowly pour in the sugar syrup hitting the side of the bowl and not the beaters. Continue beating the frosting for 10-15 minutes until the meringue is completely cool. When completely cool, slowly begin to add, a few tablespoons at a time

Beat until smooth after each addition.

Combine and melt in a double boiler:

Add to the meringue mixture and beat well until frosting reaches a spreadable consistency. This may take 15 minutes or so and you may have to chill the frosting for several minutes before beating it again to get it to stiffen. Alternatively, you can place the frosting bowl in an ice bath while continuing to beat constantly until the icing stiffens sufficiently.

Pour scalded cream over the chocolate in a medium sized bowl. Let stand for 5 minutes then stir until completely smooth. Note: You can add a teaspoon of finely grated orange zest to the ganache for extra orange flavour if desired.

To Assemble the Torte
Split the cake in two layers and brush each layer with the orange syrup. Using a piping bag or a plastic bag with the corner snipped off pipe a ½ inch thick border of buttercream frosting around the perimeter of the bottom layer of cake to form a sort of well to contain the raspberry compote. Pour the chilled compote into the well and top with the second layer of cake. Frost the entire cake with the remainder of the chocolate buttercream frosting. Chill in the refrigerator for a couple of hours before spreading on the chocolate ganache. Chill for another half an hour. Garnish with raspberries and or orange slices if desired.