Christmas Plum Pudding. Bringing back a traditional favourite. A real old fashioned British favourite, with no suet and modern day tweaks to make it perfectly. 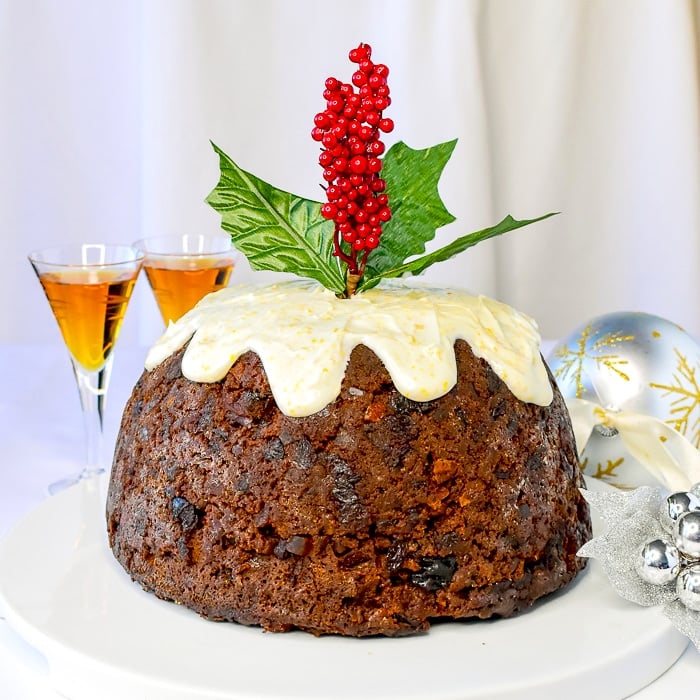 First let’s start with the basics. There are no plums in Plum Pudding.

Now that may sound a bit weird to some of you right at the outset. However, in these parts, where there are no figs in Figgy Duff, the concept is not so strange.

All of this naming confusion, of course, harkens back to our British heritage. This connection to our roots on the other side of the Atlantic remains a constant influence in Newfoundland cooking and culture.

In pre-Victorian times, both plums and figs were common names for raisins in the UK. In fact, puddings like this are even older and can be traced all the way back to medieval times. 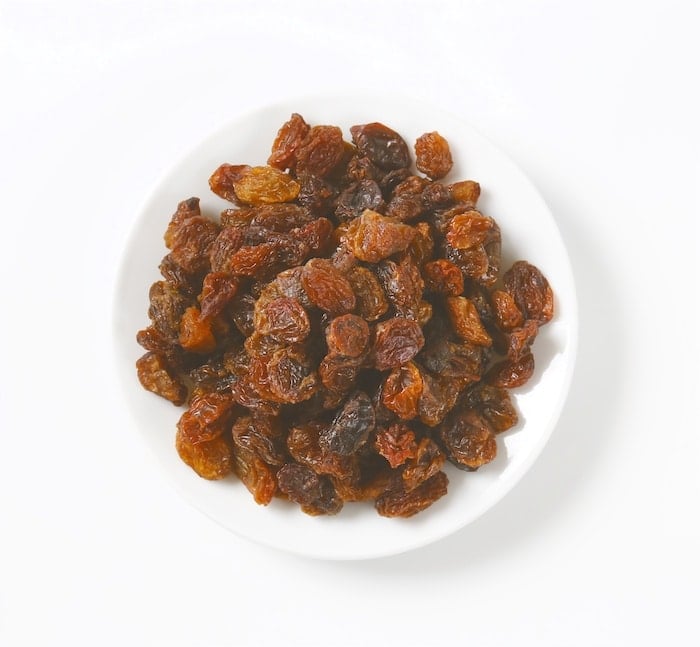 Sultana Raisins are great in this recipe but you can use any kind you like.

Centuries ago they were simpler affairs, with the earliest only consisting mostly of dried fruit, sugar, eggs, breadcrumbs and spices. While this recipe is a more modernized version, it still stays true to those roots by including all of those original elements. 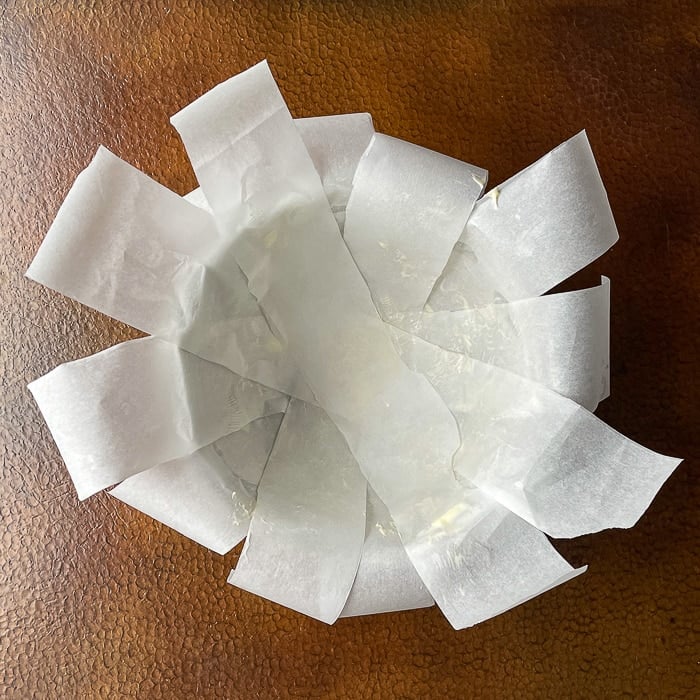 A long held tradition that you may also like to revisit, is Stir Up Sunday. That is the last Sunday before Advent when families traditionally made and steamed their Christmas Puddings.

This ritual was a learning experience for children and a way to pass the tradition on to the next generation. The long-held practice was meant to be shared by the entire family, with each member taking their turn to stir the pudding before being steamed.

One ritual was for each person to make a silent wish for the next year as they stirred. Each family member taking part was supposed to ensure good luck in the year ahead. (I think this year we could use that more than ever!) 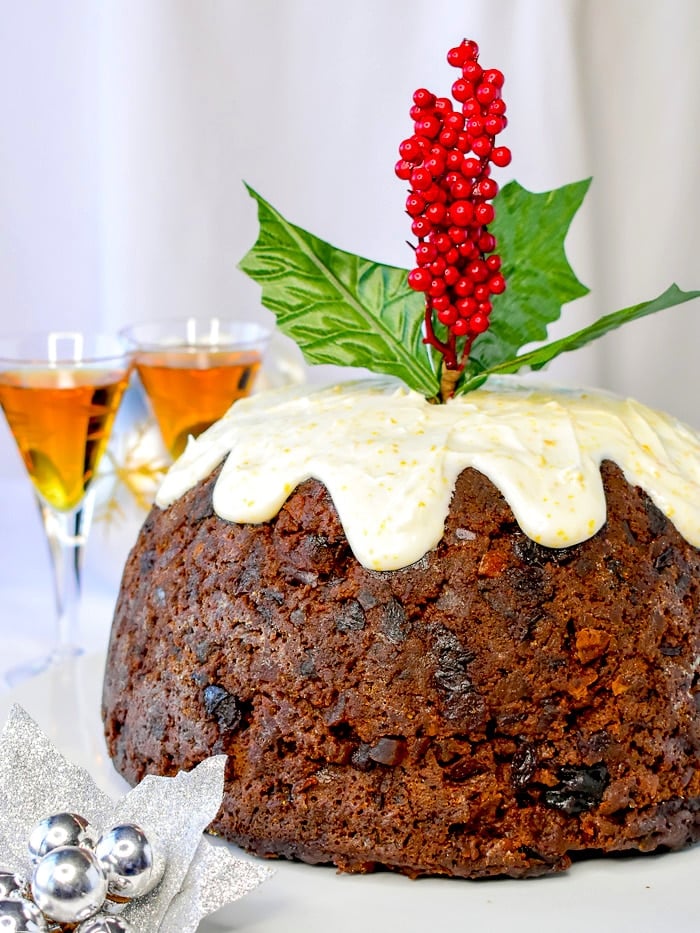 Year after year it never fails that I get messages from readers locally, asking me for a local source of suet to make a traditional pudding or cake.

Of course, in modern supermarkets it can rarely be found. I have only ever seen it a couple of times in the frozen food section, and then, only around the Holidays as you would expect.

I like to use both red and green glacé cherries for a more festive look.

If you’ve never hear of it, as many outside the UK will not have, it is a particular type of hard fat around the kidneys of cows or sheep. Finely chopped or grated suet was a very common ingredient in many “puddings” centuries ago and still survives today in British cooking and baking.

Trying to write a modern day recipe for Plum Pudding that includes suet, was a bit pointless if nobody can find it, even if they wanted to use it. I decided to use butter instead. 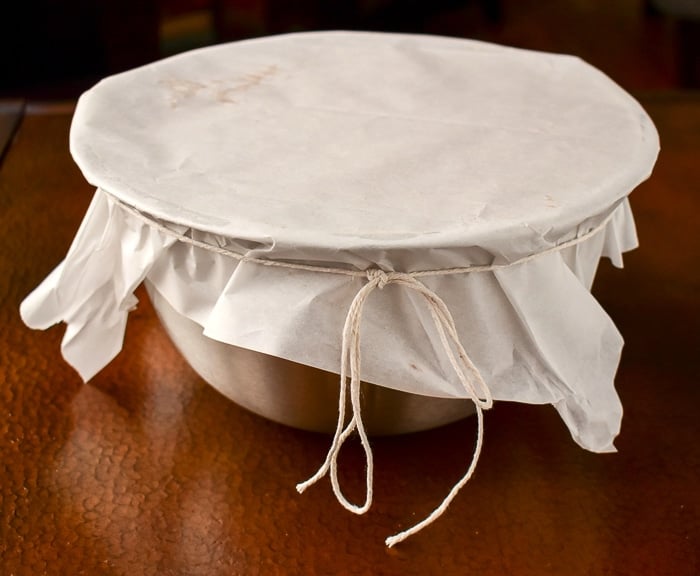 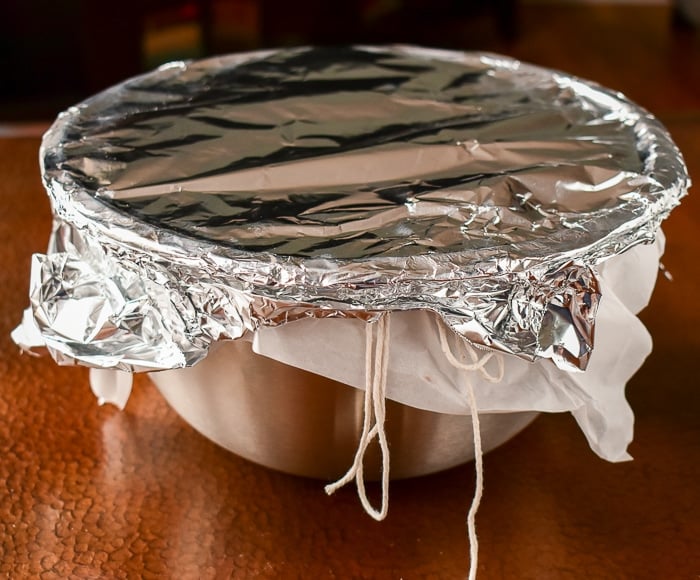 The suet basically forms small pockets of fat in the pudding mixture, which then melted into the pudding as it cooked, adding flavour and moisture. In this recipe I replace it with very cold butter which can also be grated or processed with the flour in a food processor to mimic the same overall effect on the recipe.

Actually, I think it turned out quite well. I think it also tastes better because, well, butter makes everything better, doesn’t it?

This is often the thing that intimidates people most about making a traditional plum pudding like this. However, it really should not.

A pudding steamer is a nice thing to have, and indeed we do have a couple of antique versions in our own kitchen. Many are often too small for a decent sized pudding in my experience, as well.

A dedicated steamer is not necessary though, only a little ingenuity is needed to make one out of available items already in your kitchen. 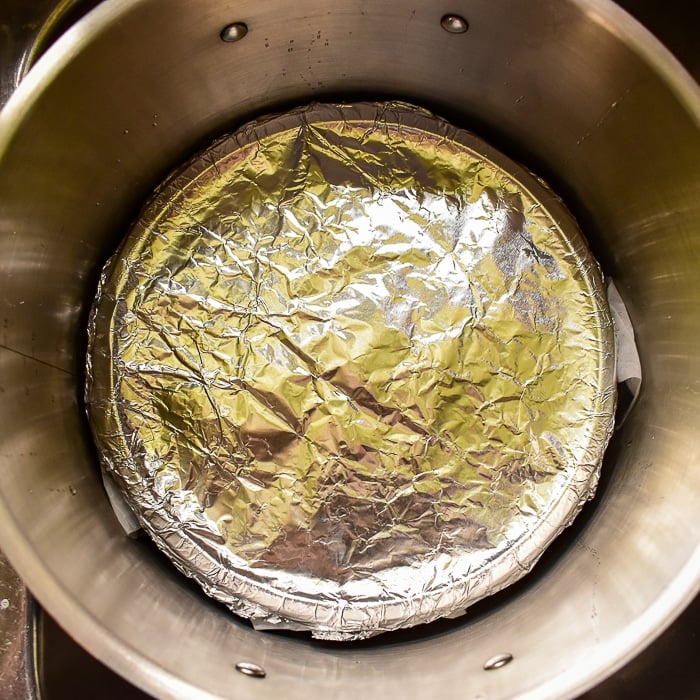 Place the completed pudding on a trivet in a large pot 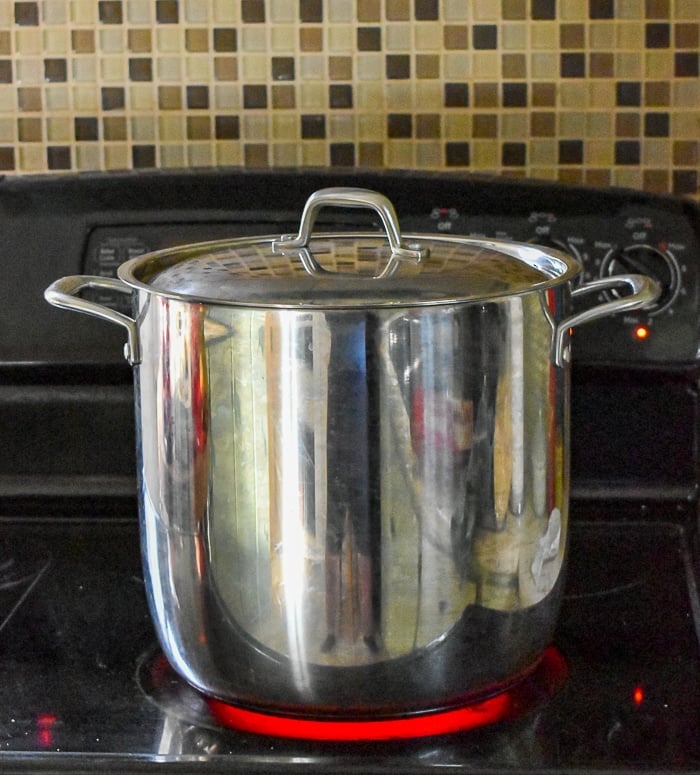 A large stock pot is ideal as a steamer

I mostly use a glass or metal bowl as a pudding steamer/mold. I have one set of metal bowls that is the perfect shape for this, which is a sort of oval-ish, half egg shape.

Having more than one size of bowl allows me to make different size puddings as well, which comes in handy when all my family shows up for Christmas.

The pudding bowl/mold then gets covered with a couple of layers of plastic wrap or parchment paper where it is secured with a piece of butcher string. A layer of aluminum foil, then goes over the top.

I place a trivet, small wire cake rack, or even an old tea plate in the bottom of a large boiler/stockpot. The prepared pudding mould is placed on the trivet to keep it away from the direct heat at the bottom of the pot.

Then, I fill the pot with boiling water, just about to the halfway point up the side of the bowl/mold. The pudding then steams away gently for a few hours and that’s it.

Reheating the pudding is quite simple because you can just put it back in the steamer for about an hour. I, however, like to serve it differently.

Especially on busy days, like Christmas Day, one more task like this is certainly not needed in the kitchen. I prefer to serve my pudding at room temperature but serve it with a hot sauce like Rum & Butter Sauce or Caramel Sauce.

Serving it this way will allow me to add a hard royal icing at the top as a traditional decoration with a sprig of holly. This particular icing has grated orange zest in it for even more flavour.

Serving it with flaming brandy at the table is always a theatrical event to be anticipated every year. It serves as a reminder of what Christmas celebrations should always be; good food, time with family, and an appreciation for traditions which keep us connected to the past.

I hope you decide to take this nostalgic taste trip with me and resurrect a delicious Christmas tradition. To you and yours, a very Merry Christmas. May it be all that you hope.

If you are looking for more recipes like this, we have gathered a collection of our Most Popular Christmas Recipes of the past 14 years. 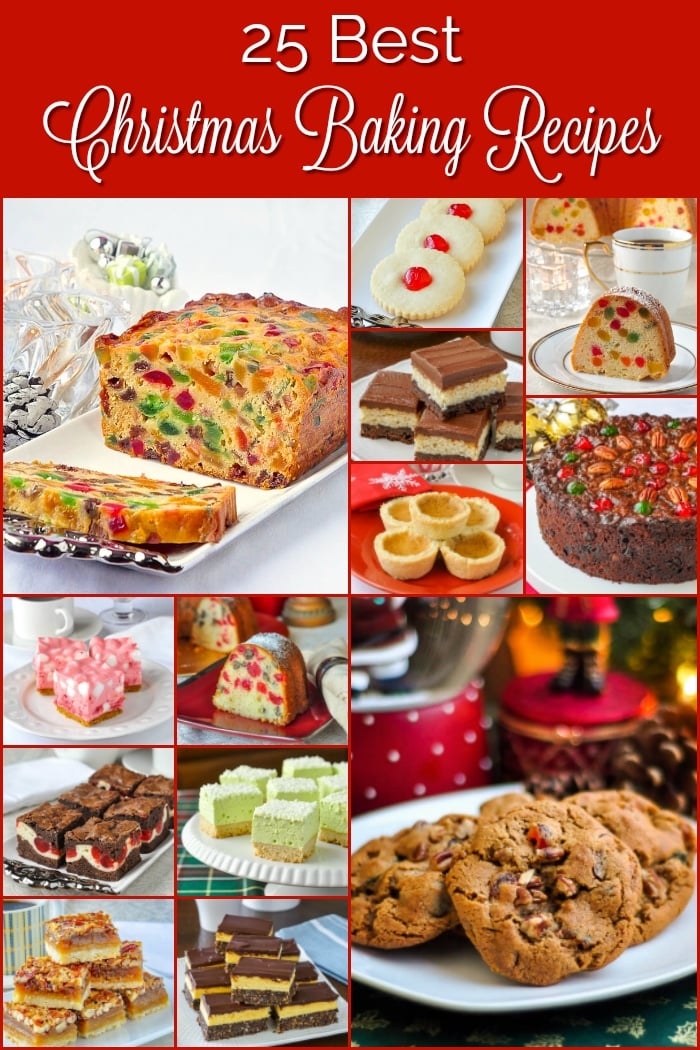 If you’re looking for other food gift ideas for the Holidays or just lots of seasonal recipe suggestions for both cooking and baking, be sure to browse our Christmas Recipes Category. 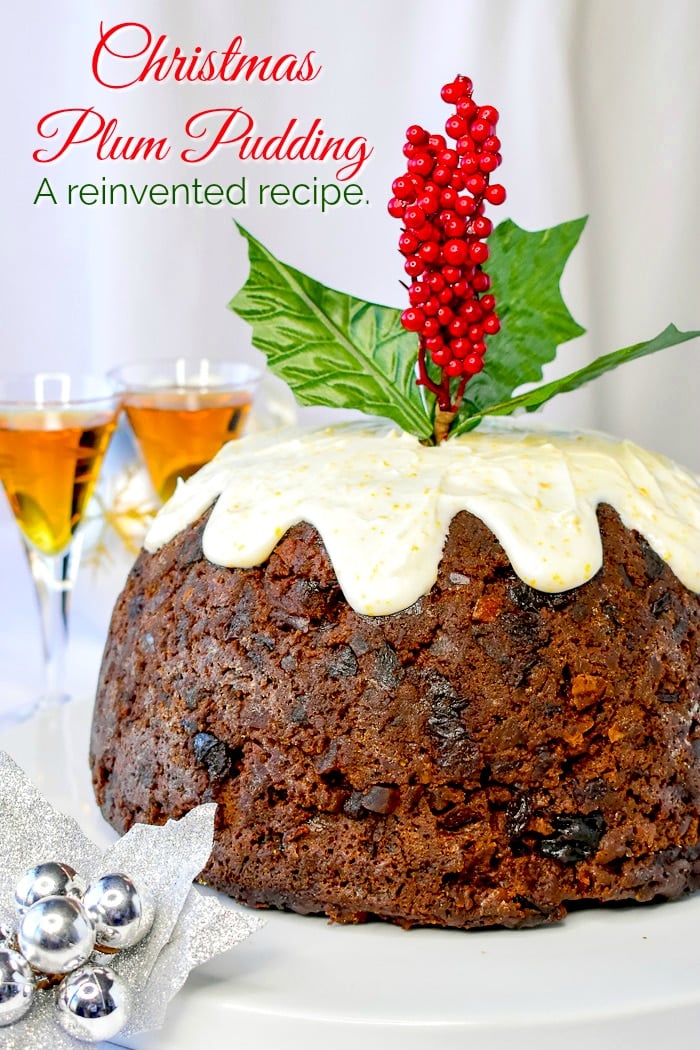 Rock Recipes a participant in the Amazon Services LLC Associates Program, an affiliate advertising program designed to provide a means for us to earn fees by linking to Amazon.com and affiliated sites. Our product recommendations are almost exclusively for those we currently use or have used in the past.
Visit my Amazon Store for my favourite kitchen gadgets and appliances, plus recommendations from my personal cookbook collection.
Continue to Content
Prep Time: 45 minutes
Cook Time: 4 hours
Total Time: 4 hours 45 minutes

Plum Pudding. Bringing back a Christmas favourite. A real old fashioned British favourite, with no suet and modern day tweaks to make it perfectly.

For the soaked dried Fruits (See note below)

For the rest of the pudding

For the hard royal icing on top.

To prepare the dried fruit

To prepare the pudding.

To steam the plum pudding

A brandy or rum soak

Can I cook Christmas plum pudding in oven but still steaming it 350? or lower or higher

I did a half recipe because I have this cool pudding mold made especially for boiled cakes that I bought in Australia. Turned out fantastic and my Aussie husband loved it. I used cherry-flavored brandy because I had it handy. All good! Printing this off for next year's Christmas.

If I wanted to halve this recipe, how long should I steam it?

Hi Love your recipes! In your plum pudding recipes any way I can substitute the eggs for something else ( someone with egg allergies).

Thank you and Merry Christmas Jody