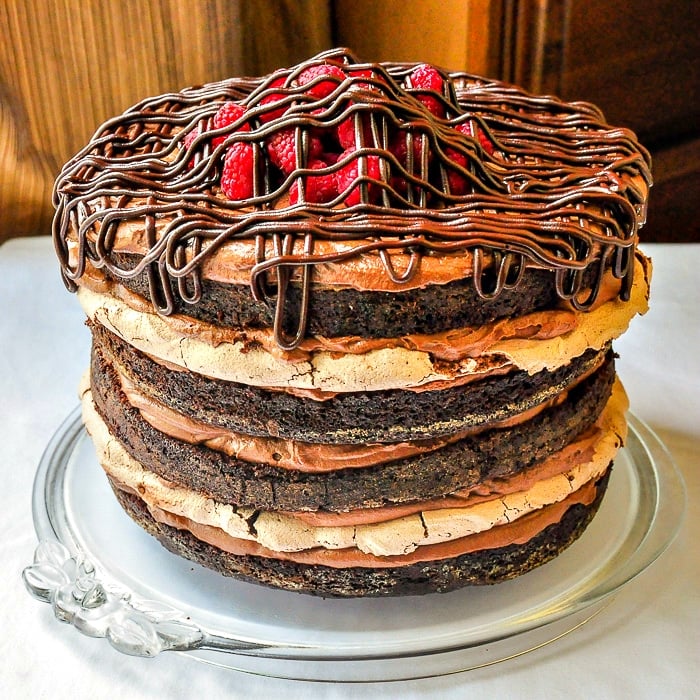 I put together this incredible cake for a morning coffee at the office. We said so long to a work colleague who is heading off to teach in South Korea. Bon Voyage Amber!

I actually doubled this recipe to produce a large 10 inch 4 layer cake which served about 40 or more people.

I prefer 50% cocoa dark chocolate chips in this recipe but you can use semi-sweet if you prefer..

This cake really does make an impression but is probably much easier to make than you might think. The cake is a simple one-bowl scratch cake which gets filled with a very easy to make whipped ganache frosting.

If you can whip egg whites and turn on the oven, you are already half way to making the melt-in-your-mouth chocolate meringues. Those get added between the cake layers.

What makes this cake exceptional is the incredible chocolate flavour coming from all three elements included in its construction. The tender cake, the creamy ganache and melt in your mouth chocolate meringue make it a textural delight as well.

One note to make is that this is not a cake to make well in advance. The Pavlova is very susceptible to dissolving in high humidity, so it is best made and constructed just be for being served to get all of the elements at their best.

Love chocolate desserts? Be sure to browse this incredible collection of Favourite Chocolate Recipes from the past 10 years on Rock Recipes. 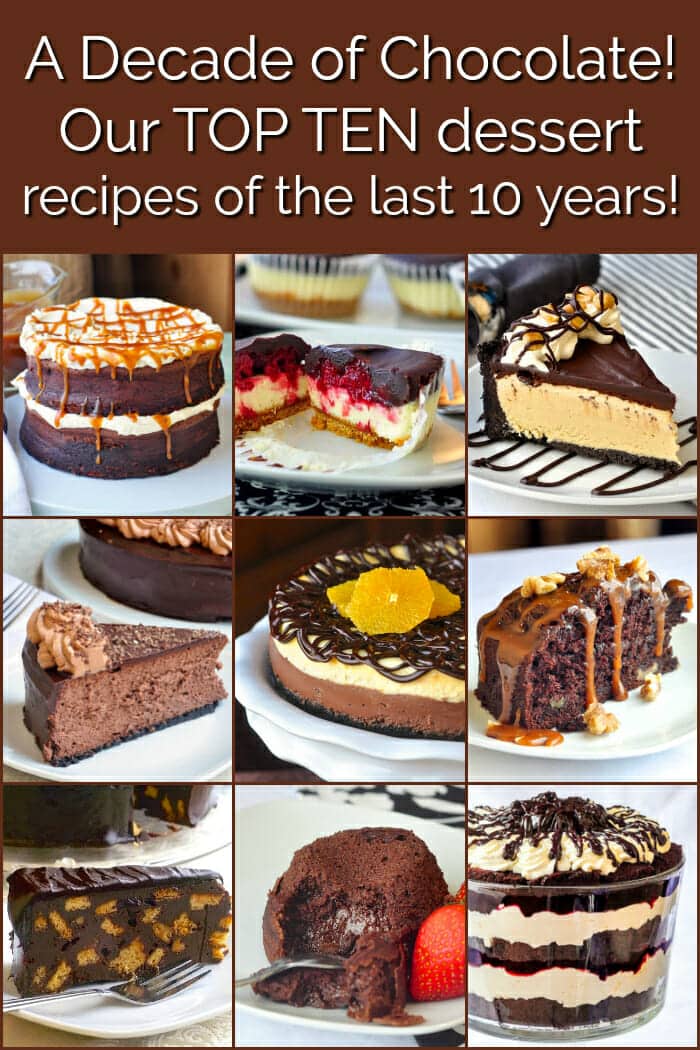 It’s easy to keep up with the latest home style cooking & baking ideas from Rock Recipes. Be sure to follow Rock Recipes Facebook Page and follow us on Instagram. Plus you’ll see daily recipe suggestions from decadent desserts to quick delicious weekday meals too.

You can also sign up for our FREE newsletter to know immediately when we add new recipes. You’ll get weekly suggestions for great family friendly  meals and desserts too!

TO PREPARE THE CHOCOLATE MERINGUES

Sift together the corn starch and cocoa.

Sprinkle over the meringue mixture and fold in until completely incorporated along with the 1 tsp white vinegar.

This step helps a crisp crust to form on the meringue. Drop the meringue in two halves onto a parchment paper lined baking sheet and spread it out into two 9 inch circles.

Bake for about 1 hour or until small cracks appear in the meringue. Turn off the oven, leave the door ajar and allow the meringues to cool completely in the oven.

TO PREPARE THE CHOCOLATE CAKE

Combine all ingredients in a mixing bowl and beat with electric mixer for 2 minutes.

Pour into 2 greased and floured 9 inch cake pans. Bake at 350 degrees F for 30-35 minutes or until toothpick inserted in the center comes out clean. Cool completely on a wire rack. When completely cooled, split the two layers into four with a sharp serrated bread knife.

TO PREPARE THE WHIPPED CHOCOLATE GANACHE

To prepare the filling, melt the chocolate chips and 1/2 cup whipping cream together in a double boiler.

Stir constantly over a gentle simmer in the double boiler, just until melted and smooth throughout. You do not want this mixture to get hot, it should be just at the melting point and only lukewarm to the touch.

Transfer to a large mixing bowl.

In a separate bowl, whip the 2 cups whipping cream to firm peaks.

At this point you will probably have to chill this frosting for a half hour or more in the fridge if it is too soft to work with.

Just give it a quick fold with a rubber spatula every 10 minutes so that it cools evenly in the fridge.

TO CONSTRUCT THE CAKE

To construct the cake, lay the first of 4 layers of cake onto the serving plate.

Cover with a thin layer of the chocolate filling then add one of the meringues and another thin layer of filling before adding the second layer of cake.

The middle layer just gets topped with the chocolate filling.

Garnish with melted chocolate and berries if desired.

One note to make is that this is not a cake to make well in advance. The Pavlova is very susceptible to dissolving in high humidity, so it is best made and constructed just be for being served to get all of the elements at their best.

How far is advance can I make this? I want to make sure the meringue doesn't get soggy.

This is one to serve on the day it's made.

This was a hit! My advice to anyone considering it, go for It!

I made this yesterday for a BBQ get together and it was a HUGE hit! Sending love for Rock Recipes from Portugal Cove!

That's awesome! Thanks for letting us know about it!