Coconut Cream Cheesecake. The ultimate indulgence for coconut lovers with toasted coconut in the crust & in the cheesecake batter for full coconut flavour! 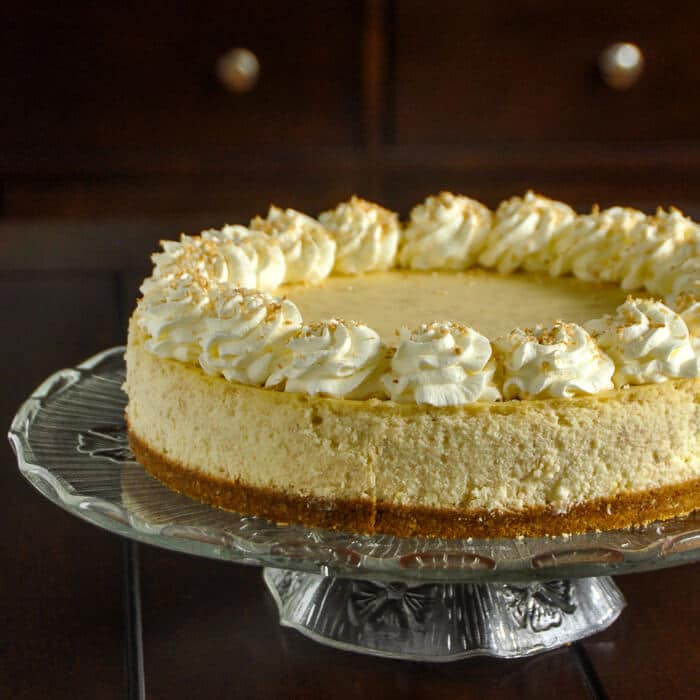 I’d planned to develop a recipe for Coconut Cream Cheesecake for a quite a while now but never got around to it until this week. The inspiration, or maybe just the reminder, came from our server at Merchant Tavern last week, which I wrote about earlier.

It was a visit that also inspired our newest chicken wing recipe: Southern Fried Wings with Chipotle Aioli and Honey Drizzle.

At the end of the meal she was describing the dessert specials when she inadvertently went off on a tangent. She described the incredible dessert she had the evening before at a different restaurant, which she didn’t mention by name.

The dessert, by coincidence, was Coconut Cream Cheesecake. I said to Spouse, “I’ve been meaning to try something like that. We should do it next week.”

The discussion then ensued on how to infuse the most coconut flavour into a cheesecake and keeping it as creamy as possible. We both agreed that toasted dried coconut would be best because the toasting brings out more flavour.

That idea had worked well in our recent recipe for Toasted Coconut Tea Biscuits. A little pure coconut extract would surely help too, we thought. 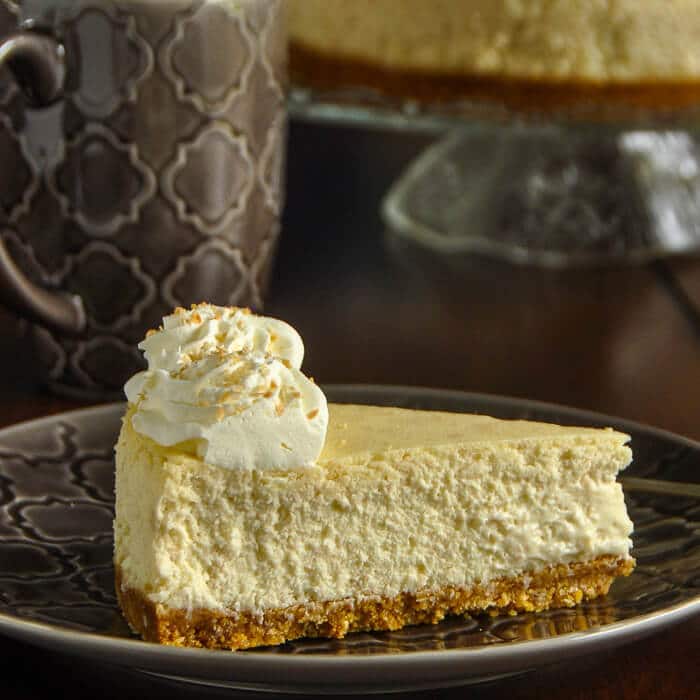 Finally we discussed how to incorporate coconut milk into the recipe. I was a little worried that the coconut milk would affect the creaminess of the final baked cheesecake.

Especially if I substituted it for all of the whipping cream that I normally add in cheesecake recipes.

So, I settled on a blend of coconut milk and whipping cream as a balance, favouring the coconut milk to make up most of the blend. It worked very well indeed.

Fine cut dried (desiccated) unsweetened coconut is the type to use in this recipe.

Although, I did notice that the coconut milk did make the cheesecake require a longer baking time. Not to worry though; even though it was in the oven at a low temp for 90 minutes.

As you can see from the slice of cheesecake in the photo above it was still incredibly creamy and smooth.

Coconut Cream Cheesecake just out of the oven.

I also worried about the texture of the coconut affecting the creaminess of the cheesecake. But since we used fine cut, this did not turn out to be a problem at all.

It was almost as smooth and creamy as our now famous Old Fashioned Coconut Cream Pie, which is one of the most popular recipes out of the over 1700 to be found here. I expect this recipe might just give that top hit a run for its money.

Trust me, this is one recipe all coconut dessert lovers just have to try. 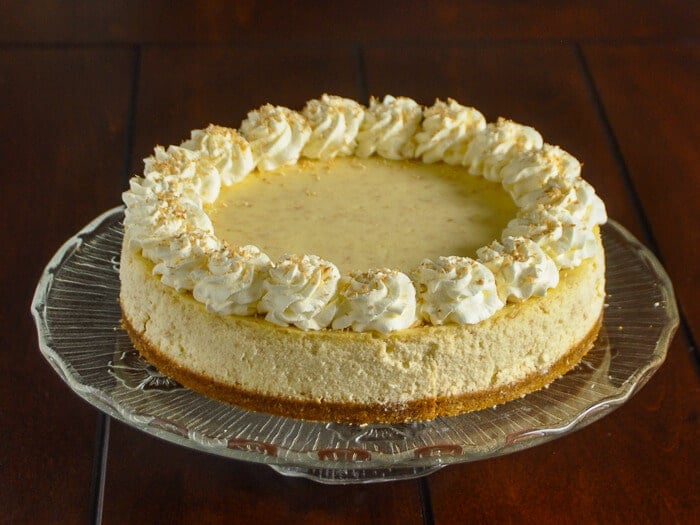 Be sure to check out this collection of Rock Recipes Most Popular Cheesecake related recipes. 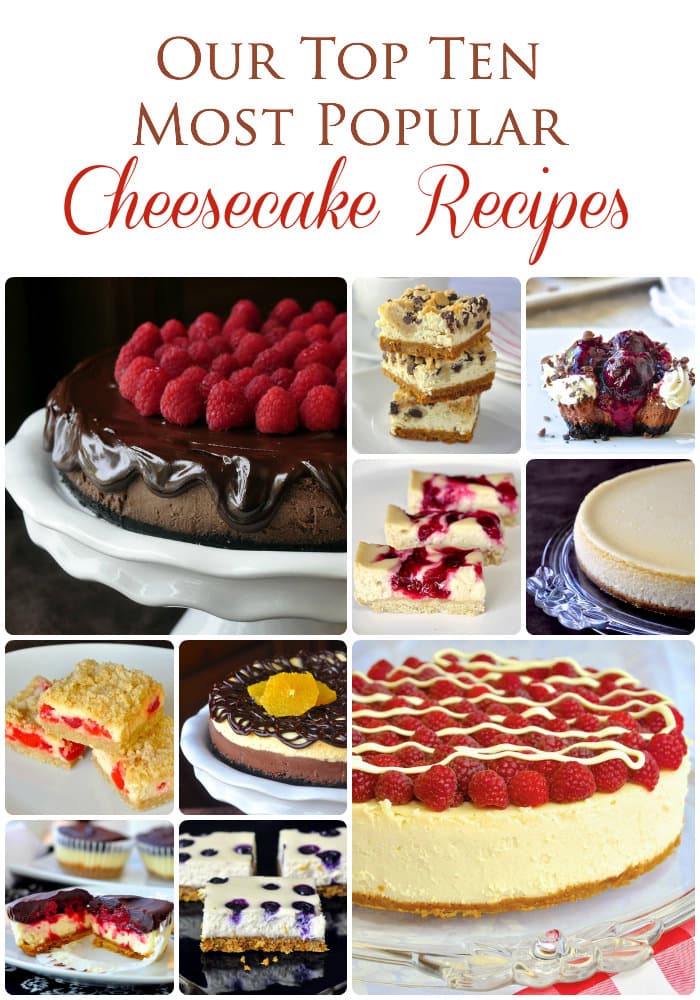 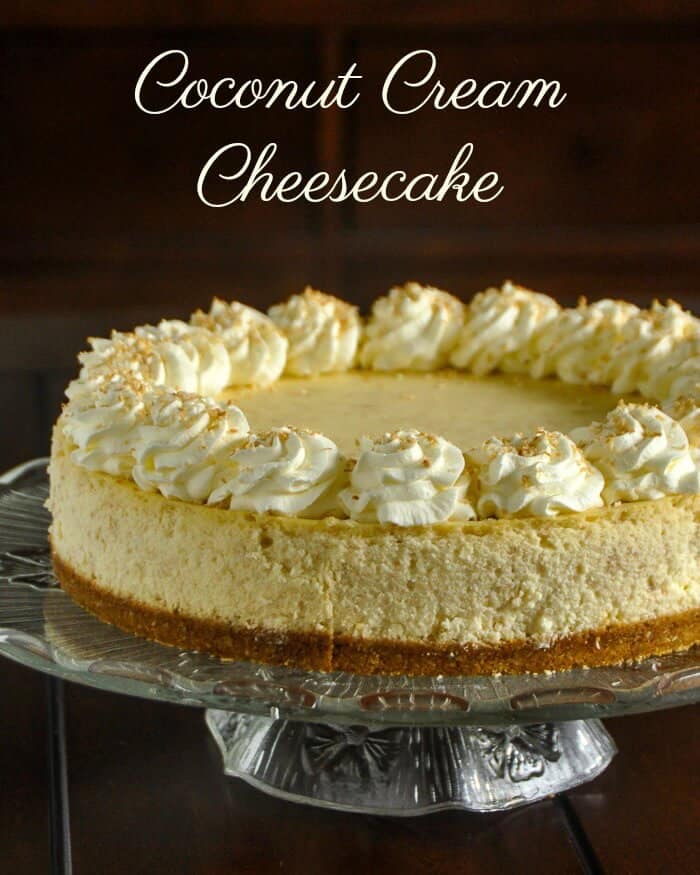 You can also sign up for our FREE newsletter to know immediately when we add new recipes. You’ll get weekly suggestions for great family friendly  meals and desserts too!

Coconut Cream Cheesecake - the ultimate indulgence for coconut lovers with toasted coconut in the crust & in the cheesecake batter for full coconut flavour!

For the cheesecake batter

To prepare the cheesecake batter

For the Coconut Whipped Cream

To toast the coconut, preheat oven to 325 degrees F and sprinkle the coconut evenly in the bottom of a 8 or 9 inch baking pan. Bake for about 5 minutes or until lightly golden brown. Give the coconut a toss at least once to make sure that it browns evenly. Watch it closely. Dried coconut does still contain coconut oil and it can burn quickly once it's toasted.

I made this cheesecake last night and all I can say is OMG. So easy, I use sweet flaked coconut and baked it in a water bath. The creamiest cheesecake ever, thanks so much for sharing Barry!!

So delicious! This dessert combines two of my husband's favourite things - cheesecake and coconut - and it did not disappoint. It was very light compared to other baked cheesecake recipes I've made over the years. A definite win for us!

So.. I have a question for ya.. I just made this cheesecake and it turned out PERFECT. However, the topping, I'm having an issue with.. it says in your ingredients "whipping cream" which is heavy whipping cream, not "whipped cream" right?? I had a bad feeling about doing whipping cream, because..what would hold it together and make it fluffy? No gelatin? I tried it and the result was just what I thought.. it's liquid. So what am I supposed to use? Thanks!!

Hello is this possible to make as mini cheesecakes ? If yes for how long do you bake it?

This is so bizarre. I do believe I was your server at the Merchant. I was just now perusing coconut cheesecake recipes and noticed right away that you mentioned the tavern. I remember talking to a guest about ghat coconut dessrtvI had the night before. This tickled me. 4cyears later....